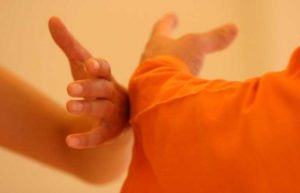 Some students who begin learning tai chi are totally surprised by the introduction of a strange partner practice called pushing hands. They may have been attracted to tai chi in the first place because it is a solo pursuit. They have no particular desire to interact with others…
Pushing hands, for them, is a total surprise.

For some students, the surprise turns immediately into pleasure. For others, confusion and embarrassment. To see what some of the factors might be, let’s make up a little story about Jane and Bill. Be assured, this is not just mindless fiction.

This story is based on compilations from a sampling of hundreds of students :

« Jane is fascinated by the pushing hands demonstration her teacher does with one of the advanced students. The teacher explains the mechanics of single pushing hands. Then the class is invited to find partners in order to try it out. Jane looks around eagerly for a partner. She had been a tom-boy as a girl and loves the idea of trying out this push. She is less excited, however, about the yield , not really understanding what it is.
Bill, on the other hand, hates the idea of pushing or being pushed. He had been bullied as a child in the playground and even the word push sends shivers up his spine. Also, he had raced to class on his bike and had worked up a sweat. He was deeply concerned about the state of his arm-pits and passed his nose over his shoulder to check.

The situation could not have been worse. Yes it could. He saw Jane walking right towards him. He had liked the look of her from the first day of the class but had always managed to stand far away from her, partly so he could see all of her at once, and partly from shyness.

Bill tried to remember which hand and which foot the teacher had put forward and if the partner had had the same or opposite hands and feet. He began to sweat more but Jane just picked up one of his hands and they seemed to have begun before he could even settle his mind on his own first question. She was forging ahead, deciding if the palm should be out or in, or the touch should be firm or soft, if the push should be able to be felt, or just sort of sensed, and Bill was still trying to dissect the hand-foot arrangement of the demonstrators. He didn’t dare think about his own body at all, or what Jane might be thinking about him or his body.
Jane did have a few thoughts about Bill, of course. She thought he could have smelled better. She thought he wasn’t paying attention. She thought he was preoccupied, nervous and not at all interested in her or in the exercise. She tried to help him relax and get his mind on what they were doing by talking. She described what they were doing, as they did it. Bill hated this. Then their wrists lost contact. Bill apologised and Jane said “No, it was my fault.” and then they started to laugh » …
courtesy taiji-forum.com

“When my opponent moves, I move first.”

Why would anyone do pushing hands at all, especially someone who isn’t particularly interested in fighting ?

Pushing hands is the reality factor of a tai chi practice, as well as being a metaphor for all human interactions. “I act, you respond.  You act, I respond. ”
For beginners in pushing hands, this is the principle we are attempting to internalise.  Later, when we become more expert, we can say what the tai chi classics say, “When my opponent moves, I move first.” That takes a little longer.

Our aim in pushing hands (as in most of life’s interactions) is to act in response to action without creating resistance.  If there is no resistance, then any conflict is automatically neutralised. If we become one with the opposing force, then the force is already powerless. If there is nothing to push against, there is no conflict. The understanding of pushing hands is as simple as these few sentences…

Let’s look at the cycle of a push. The weight moves forward. The push is in contact with the partner. The perfect forward stance is achieved by the pusher.
The other person has moved his or her weight back over the back foot and may be feeling the strain in that leg, but the singley-weighted body is ready to turn easily. Then what happens? Well, if the receiver has managed to draw in and deflect the push, then the maximum power of that push has reached its fullness without making contact with the centre of the receiver and the push begins to dissipate of its own accord. Also, of its own accord, the yielding position begins to grow into the return of a push. The activities of push and yield have turned themselves over without effort.

The more you can let yourself sink inside, the more the coiled energy will release effortlessly. Years of practise are required to understand the subtleties of this uprooting skill in pushing hands. The other way relaxation shows up is in the training of listening energy. At least half of the practice of pushing hands is focused on this activity. It sounds kind of vague, “listening energy”,  but it is very specific.

Here is the tai chi legend of the two great Masters who had agreed to a pushing hands competition in public ! Both had reputations as great fighters, both were thought to be unbeatable. They stood close to each other, touching along the lengths of each other’s arms and didn’t move. They stayed like this a long time while the crowd watched, hardly daring to breathe. Then the two Masters stood back from each other and bowed. The fight was over and only they knew who had won.
courtesy taiji-forum.com 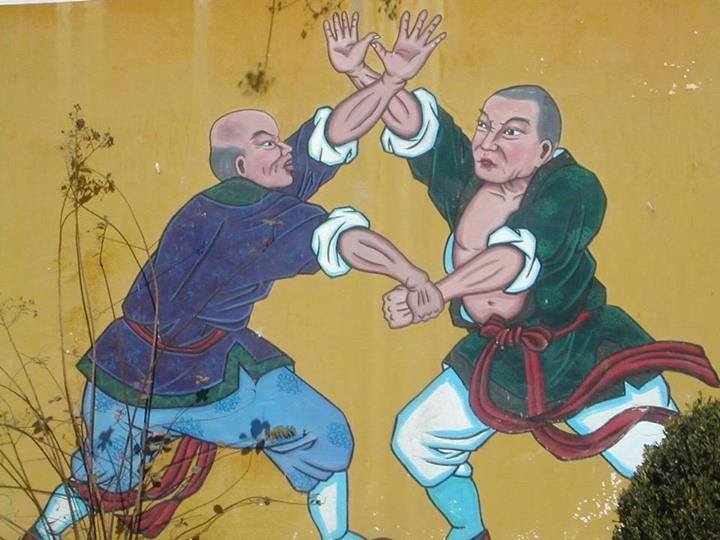